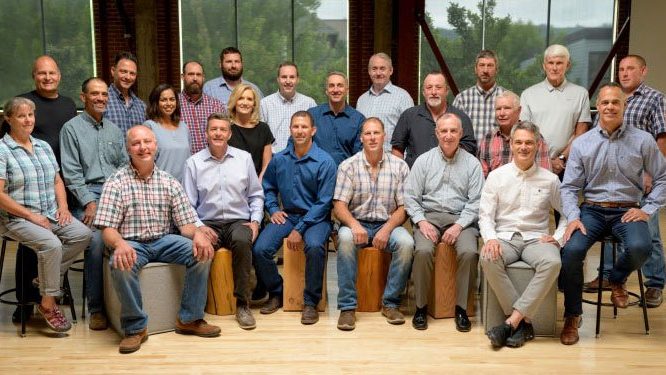 Tillamook County Creamery Association’s roots in Oregon are wide and deep. It expands to 80 farmer-owners, to 900-plus employees making cheese and more, and to communities across the country who are experiencing Tillamook products. The roots go back more than 100 years to when European settlers first found the Tillamook Valley a perfect place for crafting exceptional dairy products.

“Our ultimate goal is to sustain the farming way of life in Tillamook County and to give back to the communities where we live, work and raise our families,” said Patrick Criteser, Tillamook president and CEO.

Good for jobs, good for the community

Tillamook’s co-op started in 1909, but today reflects a modern company rooted in Oregon with products distributed across the Northwest and expanding nationally. It is growing at triple the rate of the packaged food industry and is rapidly approaching $1 billion in sales.

While five years ago shoppers might find Tillamook products only in stores on the West Coast, they can now be found in most parts of the country. Tillamook continues to expand through partnerships with Target, Kroger (Fred Meyer), Walmart, Publix and more.

“We are not growing for growth’s sake,” Criteser said. “Growth enables us to sustain the farming way of life in Tillamook County and to give back to our communities.”

“Every day, from the factory floor to our offices, our teams come to work in facilities and collaborative spaces filled with talented, passionate, and caring people,” Criteser said.

Tillamook relies on and embraces employees with diverse perspectives, thoughts, backgrounds and cultures to inform their work. It is committed to creating a climate of inclusion and conditions where all employees feel valued and have a sense of belonging.

Connecting to communities is also close to Tillamook’s heart. As a farmer-owned co-op, Tillamook knows it is important to keep the region healthy and vibrant to sustain the families for generations to come. It focuses on enriching communities through agricultural advocacy, food security and healthy children. Tillamook also commits itself to stewardship, pursuing its values of caring for people, farms, cows and products.

Tillamook’s relationship with Oregon Business & Industry (and its predecessor organizations) goes back a long way – all the way back to 1956. Throughout the years OBI has worked to honor Tillamook’s values at the state level and help ensure government and regulations allow Tillamook and companies like it continue to grow and provide jobs in Oregon.

Tillamook is more than just cheese

In 1909 several small creameries joined forces to ensure all cheese made in the Tillamook Valley was consistent in flavor and quality. They each contributed $10 to start the co-op. Today Tillamook produces more than 60 cheese types and products, including blocks of cheese, specialty cheese, cheese curds, shredded cheese, cheese slices and cheese sauce starters.

Another Tillamook standout is its butter, in both salted and unsalted. The farmer-owned co-op started branching out in 1947 with ice cream, now available in more than 40 flavors. It also includes gelato, custard, ice cream sandwiches and ice cream bars. In 1993 Tillamook began making sour cream, in regular and reduced fat varieties. In 1994 it added yogurt, available in more than 25 flavors today. This year it launched farm style cream cheese spreads in four varieties.

With so many products in so many varieties and flavors, it’s plain to see how Tillamook has expanded from those deep and wide roots in Oregon.

“Being farmer-owned and farmer-led gives us a unique edge in a competitive market,” Criteser said. “While other businesses are driven by quarterly earnings reports to shareholders, our farmer-owners take a long-term view that allows us to make smart investments and to continually innovate.”