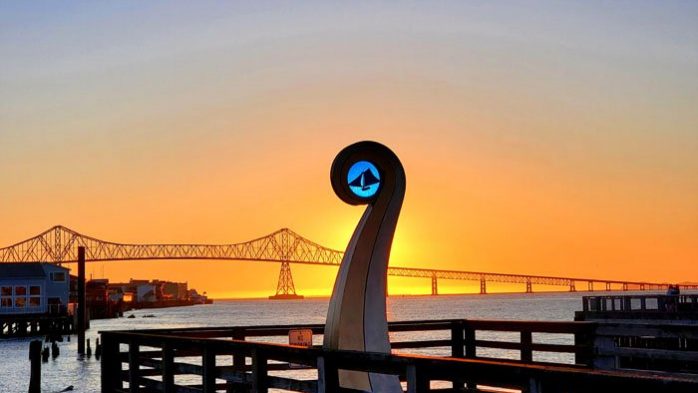 Roy Manufacturing and Profile Laser are Portland-based sister companies whose metalwork ranges from the attention-grabbing to the utilitarian. You’ve seen Roy Manufacturing’s work if you’ve walked through Clocktower Plaza at Portland International Airport or visited the Salem Convention Center. Likewise, you’ve seen Profile Laser’s work if you’ve passed through the or visited Astoria with an eye for public art.

You also may have seen Roy Manufacturing’s work in the unlikely event that you operate a machine that separates seeds or aggregate. Or if you’re a fish prevented by a perforated screen from swimming in an unhealthy direction.

Roy Manufacturing, located in Portland’s Mississippi neighborhood, was once the perforation department of a seed cleaning and mill manufacturing company. When the company decided to close the department in the late 1950s, Roy Young bought it and went into business as Roy Manufacturing with three perforation machines. Jim and Michelle Fitzhenry and partner Chris Job acquired the company in 2016, and under their leadership it has continued to produce metal screens used to separate seeds, aggregate and other things. It does so now with eight computer-controlled punch presses.

The company’s work is not purely functional, however. Perforated metal sheeting also has decorative uses, and Roy Manufacturing produces a range of punched metal facades, awnings and other architectural elements. The walls of the Salem Convention Center feature more than 200 punched-aluminum panels produced by Roy. The timepiece that defined Portland International Airport’s Clocktower Plaza for more than 30 years features a dozen perforated metal clock faces.  (The clock faces will have a new home as the airport undergoes significant renovations.)

Jim Fitzhenry and his fellow Roy Manufacturing owners acquired Profile Laser in January. The company’s sophisticated fiber-optic lasers can produce both functional and decorative work that metal punches cannot. These range from aircraft parts to the winged “M” emblem at the entrance of the Multnomah Athletic Club. The company is even capable of fabricating the components of sculptures such as the bronze and steel wave designed by Jeremy Furnish and installed on a dock in Astoria.

Profile Laser is located just south of Roy Manufacturing, and the two companies employ a total of 20 people. Though not large, the companies serve many customers outside of the metropolitan area – and, in Roy’s case, across the country. Roy has thrived, says Fitzhenry, because it has stuck to its “on spec and on time” philosophy. The company typically delivers within five days of receiving an order.

Jim Fitzhenry had no background in metals manufacturing when he and his partners bought Roy Manufacturing in 2016. He had spent much of his career as senior vice president and general counsel with FLIR Systems, a manufacturer of thermal imaging systems, and as president and CEO of Schmitt Industries Inc., which makes test and measurement equipment. Buying Roy Manufacturing and subsequently Profile Laser allowed him to run his own business and to become more engaged in operations. Co-owner Chris Job, who serves as general manager, also worked at Schmitt.

The two companies fared well during much of the pandemic, says Fitzhenry, and business has remained strong despite the rapid increase in the cost of materials. The companies’ greatest challenges, like those of many employers, involve the recruitment and retention of employees. Continued workforce shortages could push Roy Manufacturing and Profile Laser to invest more heavily in automation.