Oregon Manufacturing by the Numbers 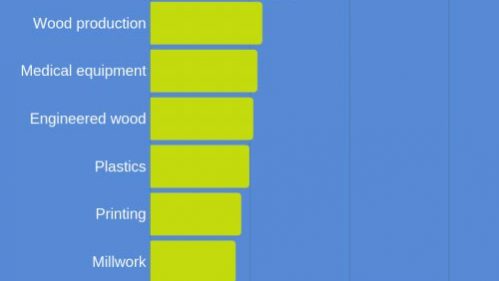 Things are bright for manufacturing in Oregon. The sector is growing, increasing jobs and wages for Oregon workers. Manufacturers are still looking for well-trained workers. Those workers will become all the more valuable in the future as the industry continues to grow and current workers retire.

So, what does Oregon manufacturing look like today? Check out these statistics to get a clear picture as OBI marks Manufacturing Day on Oct. 4.

Manufacturing in Oregon has been on the rise since the depths of the Great Recession in 2010. This steady surge continues to make up a significant chunk of Oregon’s economy and provides a high number of jobs with good pay.

Manufacturing makes up about 10.21% of Oregon’s overall employment. Those workers output $47 billion, or almost 20 percent of Oregon’s gross state product, according to the NAM.

Oregon’s time-honored tradition in wood products still holds its own today. The employment department report put two of those products within the top-paying range of manufacturing jobs. Veneer and engineered hardwood products sector has an average wage of $51,572 a year and sawmills and wood preservation pays $56,116 per year. Millwork is not far behind, with an annual wage of $42,711.

Even those not as high on the scale were still well-paying jobs ranging from $38,000 in frozen food manufacturing to $49,000 in plastic product manufacturing.

All these well-paying jobs need quality and skilled workers to fill them. That’s where Oregon, and much of the U.S., face a challenge.

With workers making their way toward retirement, positions will open up. That adds to industry growth to equal the need for more workers.

The Employment Department report estimates there will be 12,600 more manufacturing jobs by 2027. Though many of these jobs only require a high school diploma, another study examining workforce gaps found 16 percent of Oregon manufacturers wanted their applicants to have more work experience.

Manufacturing Day aims to inspire that next generation of workers by introducing students to the field and the many job opportunities. These numbers show the impact of manufacturing on Oregon’s economy and the opportunities for current and future jobs.