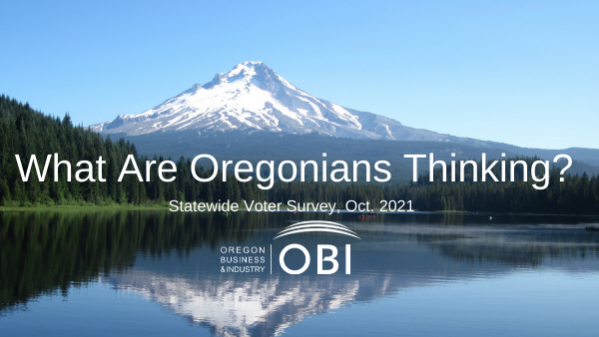 Oregon voters are frustrated. That is the overarching takeaway from a statewide voter survey conducted by DHM Research for the OBI Education & Research Foundation in October. Voters are worried about the economy and their own personal finances, are highly concerned about homelessness, see Portland as dysfunctional and harming the state overall, and believe that now is not the time to raise taxes, nor is it the time to add more regulatory constraints on Oregon’s businesses.

Here are some of the key findings from the survey of 500 registered Oregon voters:

“Oregonians are frustrated with the direction Oregon is headed, and they recognize that a strong, healthy business community can help restore economic vitality and improve the quality of life for Oregonians,” said OBI President and CEO Angela Wilhelms. “We’ve said it before, and will say it again: This is not the time for new taxes or more regulations. Instead, we need to remain focused on solving the very serious issues before us—homelessness, public safety, workforce shortages, and supply chain and distribution problems, to name a few.”

You can find results of the survey here. Overall sampling error is plus/minus 4.4%.