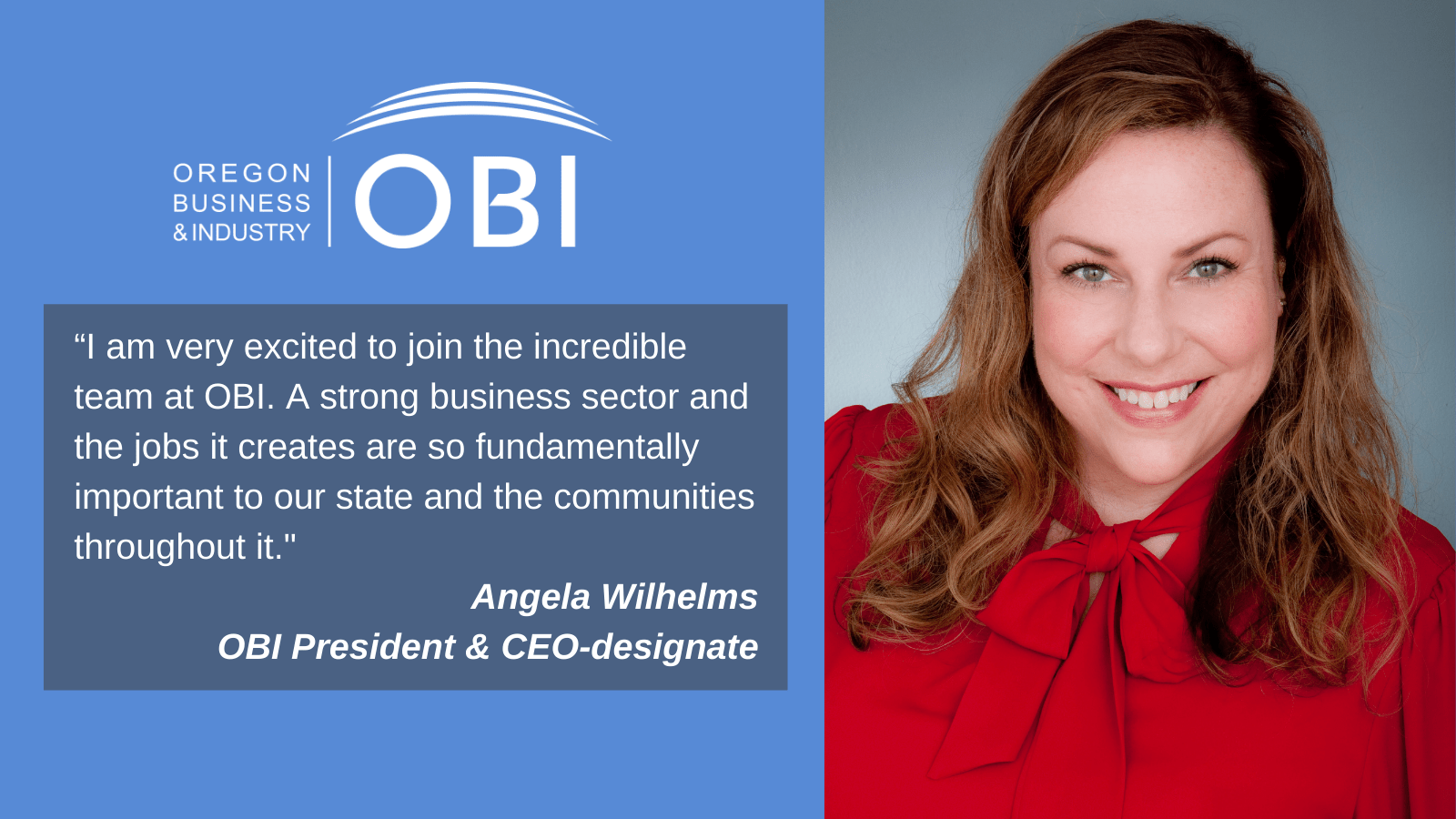 The Oregon Business & Industry (OBI) board of directors today named Angela Wilhelms as the organization’s next president & CEO. Currently an executive at the University of Oregon in Eugene, Ms. Wilhelms will begin her transition to OBI effective Sept. 1, 2021.

“After an extensive national search, we are thrilled that we found a highly qualified candidate right here in Oregon,” said Karen Vineyard, OBI’s board chair. “Angela has the talent and experience to ensure OBI continues to grow and effectively represents business in our state. She will be joining a tremendous team at OBI and will provide a fresh, new perspective on how our organization can serve our members throughout Oregon.”

Prior to joining the university, Ms. Wilhelms had a successful career in public policy. She served as chief of staff to the former Oregon House Co-Speaker Bruce Hanna and held the same role in the House Minority Office. She has also spent time in Washington, D.C., serving as press secretary to retired Congressman Greg Walden. Ms. Wilhelms was also of counsel in the Portland office of the law firm Dunn Carney, specializing in comprehensive government affairs services.

“I am very excited to join the incredible team at OBI,” Ms. Wilhelms said. “A strong business sector and the jobs it creates are so fundamentally important to our state and the communities throughout it. As a native Oregonian, I am thrilled to have the chance to work with the vast array of businesses that make up OBI’s membership throughout the state and I look forward to traveling around Oregon to connect with our members to hear firsthand about their priorities for their own companies and for our state.”

In the CEO role, Ms. Wilhelms will replace Sandra McDonough, who is retiring in October. Ms. McDonough has served as OBI’s president & CEO since 2018.

“Under Sandra’s steady leadership, OBI has become a strong and healthy organization and a preeminent voice for business in the state of Oregon. We are grateful for her service,” Ms. Vineyard said.  “While the work is not always easy, it is critically important, and I am absolutely confident in Angela’s capabilities to carry out our mission to strengthen Oregon’s economy, in order to achieve an equitable, prosperous and competitive Oregon for the benefit of present and future generations.”

Wahl & Associates, based in Portland, conducted the executive search on behalf of the OBI board of directors.

Oregon Business & Industry is the largest business association in the state, advocating on behalf of nearly 1,600 businesses for a strong and healthy economic climate in Oregon. Our team represents the voice of business in the state capitol, state and federal regulatory agencies, Congress, and the courts.