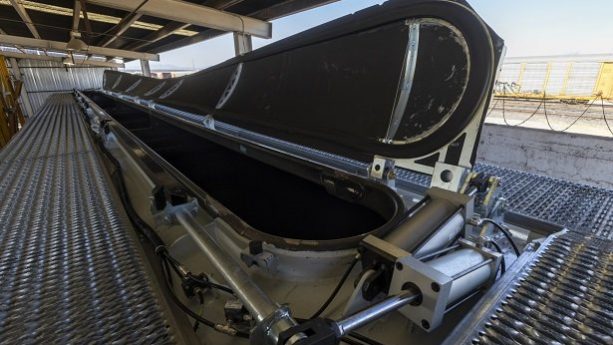 Working around trains has its dangers, including falling from – or even into – railroad cars. Thanks to The Greenbrier Companies, such incidents may soon become less common. The Lake Oswego-based manufacturer of rail cars has developed an automated hatch that eliminates the need for workers to climb on certain kinds of cars. And people who don’t climb on rail cars can’t fall from them.

The Tsunami Hatch, as it’s known, recently concluded three years of prototype testing, says Peter Jones, Greenbrier’s senior vice president for international engineering, product development and automation. The company developed the hatch with the cooperation of a North American client that wanted to get workers at its grain-shipping terminals away from train cars. Without automation, hatches on top of covered hopper cars must be opened and closed by hand. Workers at grain terminals are protected by specialized safety systems that include railings, ramps and even harnesses. But no system is perfect, and the best way to keep workers from falling is to keep them on the ground.

Because the Tsunami Hatch is powered by air pressure, it can be linked to the pneumatic system that operates rail cars’ brakes, says Greenbrier Marketing Communications Manager Mallory Moran. It holds particular promise as a feature of unit trains, which carry a single type of cargo. With the locomotive acting as a compressor, each car’s hatch could open automatically according to its proximity to a loading facility. Besides keeping workers safe, such automation would accelerate loading significantly. Faster loading might even make rail transport more competitive with trucking, which some grain shippers prefer, says Moran.

Greenbrier has been building automated hatches into rail cars for the European market for years, and the lengthy development time for the North American market has been driven less by technological than regulatory hurdles. U.S. regulations require covered rail cars to have running boards on the roof, which makes the installation of a long, narrow hatch difficult. Greenbrier had to pursue special permitting to remove one of the required running boards and hopes that the safety benefits of the Tsunami Hatch will allow the removal of all running boards, says Moran. The weight reduction would allow Greenbrier to increase the capacity of rail cars, increasing efficiency without exceeding maximum-weight restrictions.

To build a long and narrow hatch that fit between the two remaining running boards, Greenbrier partnered with Shur-Co, a South Dakota-based manufacturer of tarping systems commonly installed on trucks and trains. The result is a flexible and relatively lightweight hatch that opens and closes quickly and safely.

Now that prototype testing has concluded, several customers are testing the Tsunami Hatch, says Moran. Meanwhile, the customer that that asked Greenbrier to develop an automated hatch has several prototypes in rotation.