From Towers to Terminals, Freres Product Has Mass-Timber Mojo 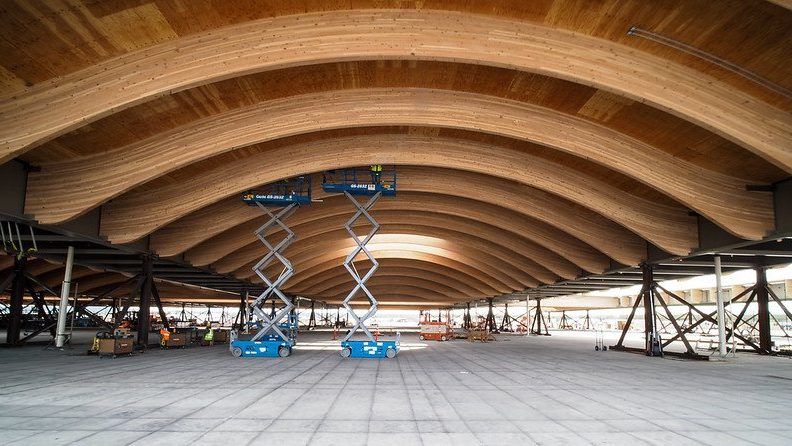 As they pass through Mill City on their way to and from the Willamette Valley, most Oregonians are unaware that just to the south, across the Santiam River, a $40 million mill is producing an innovative timber product that can support a high-rise building while minimizing its environmental footprint.

Freres Engineered Wood opened its Mass Ply plant less than a decade ago, yet its work can now be found be found in a wide variety of structures, from multifamily residential buildings and nonprofit headquarters to the massive timber roof that will cover Portland International Airport’s new main terminal.

Technically speaking, Mass Ply is a type of cross-laminated timber (CLT), which is an engineered product consisting of layers of wood glued together to form panels. Because CLT layers are oriented at right angles to one another, the resulting panels are very strong and rigid.

What differentiates Mass Ply is the thickness of the timber layers. While CLT products typically use dimensional lumber, Mass Ply is composed of electronically graded veneer layers. Each inch of Mass Ply panel contains nine layers of Douglas fir veneer glued together with resin. One-inch panels – aka lamellas – can, in turn, be glued together and machined to produce a wide range of structural building components. Freres can produce Mass Ply beams and columns up to two feet thick, four feet wide and 48 feet long. Individual panels can be up to 12 inches thick, 12 feet wide and 48 feet long. Mass Ply can even be used in elevator shafts.

Its strength and versatility make Mass Ply an ideal component of mass timber projects, which are those in which wood products take up load-bearing duties traditionally performed by steel and concrete. Because the structural components of buildings up to 18 stories high may now consist of timber products like Mass Ply, developers have a greater range of materials from which to choose, says Tyler Freres, company vice president of sales.

Reasons to choose timber include sustainability and carbon sequestration, which are particularly important for net-zero projects. But that’s not all, as a recently completed mixed-use project in Oakland, Calif., shows. The four-story building used prefabricated Mass Ply panels, accelerating construction (the primary structure took only 23 days to build) and minimizing the need for on-site storage, which allowed the project to maximize the use of its tiny lot. Mass Ply also will be used in an 18-story building in Oakland that will be one of the largest mass timber towers in the world.

Freres’ development of Mass Ply began in 2015, when the family owned company was experiencing difficult market conditions for plywood and veneer, says Tyler Freres. Following a trip to Europe to check out CLT manufacturing, company leaders determined that Freres could produce a superior value-added product composed of veneer. Shareholders then agreed to invest $40 million in a new Mill City facility, which came online in 2017.

Mass Ply has been used in many Oregon projects as well as those in Oakland. They include the Chemeketa Community College Agriculture Complex, the Santiam Canyon School District’s new gym and the Meyer Memorial Trust’s new headquarters in Portland.

The highest profile use of Mass Ply to date is, of course, the nine-acre roof that will top the new main terminal at Portland International Airport. The roof diaphragm – the outer shell connecting the structure’s exposed wooden beams – consists of Mass Ply panels. Because the roof undulates, each curved panel is unique. Almost 75% of the wood fiber used in the panels was harvested from trees killed by Oregon’s 2020 wildfires, which destroyed 5,670 acres of trees on Freres timberland.

Most of the veneer Freres Engineered Wood produces is still sold on the outside market, and Freres directs much of the remaining veneer to its plywood mill. But Mass Ply is the most rapidly growing part of the company’s business, and sales have doubled every year. Sales are so strong (Mass Ply output is booked for the next six months) that the company is trying to figure out how to boost short-term production.