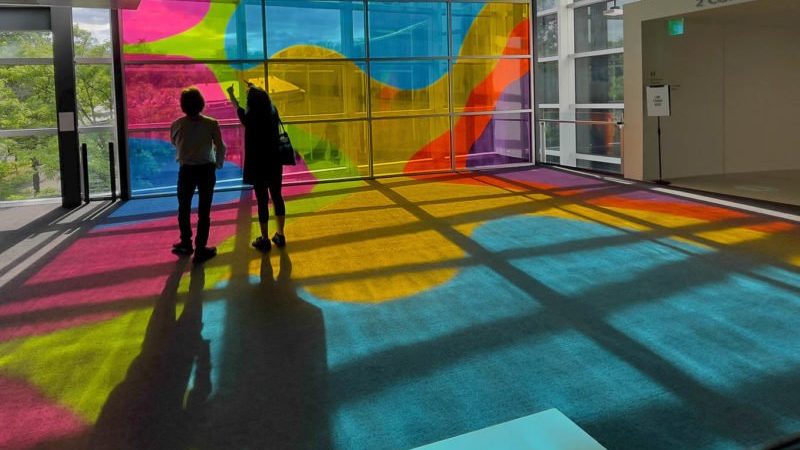 Perhaps no Oregon business more seamlessly marries manufacturing and art than Bullseye Glass, a Southeast Portland institution that supplies a comprehensive range of colored glass products and educational resources to artists, architects, and other makers throughout the world. Founded in 1974 to repurpose abundant glass made available by Oregon’s new Bottle Bill, Bullseye has evolved steadily through technological innovation and market development. The company now has more than 130 employees, and its work appears in public buildings, museums, and even the U.S. Capitol.

Bullseye founder and CEO Dan Schwoerer studied engineering and art at the University of Wisconsin-Madison, where Harvey Littleton established a pioneering studio program in art glass. His students included Dale Chihuly, and, of course, Schwoerer, whom Littleton urged to settle in either San Francisco or Seattle rather than Portland, which at the time was considered West Coast flyover country. Schwoerer chose Portland, in part because it was an affordable place to live and start a business.

Portland also gave Bullseye access to inexpensive raw materials. The 1971 Bottle Bill created a glut of recyclable material, and Bullseye figured out how to transform it into colored sheet glass. This process allowed Bullseye to become established without manufacturing glass from more expensive raw materials that also would have required significantly more energy to melt.

To sell their glass, Schwoerer and his colleagues drove up and down the West Coast in a microbus and visited studios and markets. They graduated to trade shows and eventually arranged for distribution in art hubs like New York and Los Angeles. Stained glass had become popular – especially Tiffany lamps – and Bullseye’s manufacturing technique, which involved rolling molten glass by hand, distinguished their products from machine-made glass. Bullseye also produced a distinctive copper red glass at a time when red glass was hard to find, says Schwoerer.

Bullseye continued to innovate, leading to the development of a process to fuse glasses of different colors. Such technology was new to the industry and allowed for the creation of glass paintings and stained glass windows without lead lines, says Schwoerer. Because a market didn’t yet exist to capitalize on its process, Bullseye devoted years to education, delivering lectures, leading workshops and giving demonstrations at studios and art schools around the country and the world. And because kilns and other supplies used to fuse glass weren’t readily available, Bullseye sold those as well. Eventually, kilnforming, as it became widely known, gained a foothold among artists and has since been adopted by architects. To further architectural interest in glass fusing, Bullseye created an architectural fabrication studio, which collaborates with artists to produce large-scale works such as a 1,775-square-foot piece that overlooks the lobby of the Multnomah County Central Courthouse and “The Secret Life of Glass,” a fused glass window that casts multicolored light on visitors to The Corning Museum of Glass.
In a recent project of note, Bullseye created 36 replacement windows for the U.S. Capitol cupola. The company was able to make period-accurate reproductions by rolling out molten glass on a water-cooled steel table. Check out the video here. Each window is about three feet wide and eight feet tall, says Schwoerer.

Today, Bullseye provides worldwide distribution to over 30 countries and regularly ships containers of glass overseas. As the company has grown, it has invested heavily in technology that allows it to manufacture more cleanly. Its cooling-water recycling system has cut its water use by 60%. A system that mixes oxygen with the natural gas used to heat its furnaces has cut Bullseye’s natural gas consumption dramatically while reducing greenhouse gas emissions by more than 60% – though the system costs the company an extra $250,000 per year to operate. And in 2016, Bullseye installed a $1.5 million air filtration system to shrink its environmental footprint even further.

Like many manufacturers, however, Bullseye does have its struggles. Many of the supplies and materials the company uses – refractory bricks used in furnaces, for example – are no longer made in the U.S. and take a great deal of time to deliver. Meanwhile, electronic furnace controllers are made in the U.S., but the backlog is as long as one year. Not long ago, says Schwoerer, it took only weeks to procure new controllers. And the affordability that made Portland so attractive to Schwoerer in the 1970s has eroded. This has forced an increasing number of employees who historically took advantage of the factory’s city setting by walking or biking to work to commute from greater and greater distances.

Still, says Schwoerer, as an art-championing company that works closely with artists, museums and galleries, Bullseye remains a great fit for Portland.